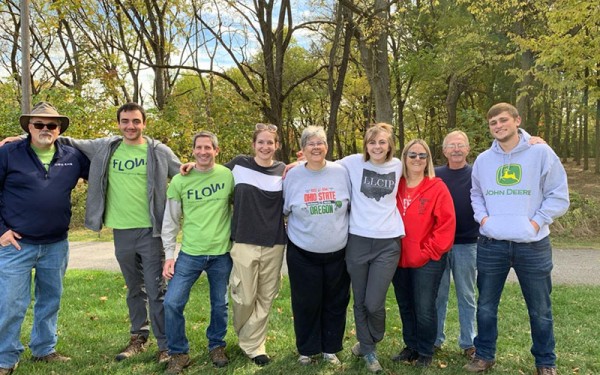 Kent Halloran was a child when he saw a newspaper headline that would change his life forever. The caption in the Toledo Blade said, “Lake Erie is Dead.”

“That headline scared me,” Halloran said. “How do you refer to this immense, freshwater resource as dead? How does that happen?”

The EHS Safety Engineer’s grandparents had a cottage on the lake, and he used to swim there. That chance moment glancing at the newspaper would lead him to a lifetime of environmental restoration efforts.

After completing his education, Kent worked briefly with the U.S. Navy before working more than 20 years for various engineering consulting firms as a water and wastewater design and construction engineer. He also was a stormwater engineer.

While Halloran enjoyed his various jobs in the field, he wanted to do more.

That’s when he began volunteering with campus organizations during his time with Ohio State. He got involved with the Carmack Woods cleanup, which started as a student-led Capstone project in spring 2018.

“The area had been overgrown with invasive plants,” Halloran said. “Japanese Honeysuckle was by far the most prevalent. You could not see across from one parking lot to another.”

On October 19, volunteers from USG’s Seeds of Service and Friends of the Lower Olentangy Watershed (FLOW) removed invasive plants and planted trees and shrubs in the 6-acre space.

“Since spring 2018, more than 1,600 native trees and seedlings have been planted at Carmack Woods,” Backs said. “In the near future, any continued work at Carmack will consist of honeysuckle removal and maintenance, ensuring that the native species that have been planted will have room to grow.”

“Cleaning out the invasives has helped open up views into and through the woods, creating a safer environment and, more importantly, providing opportunities for planting native trees and shrubs that we have been able to do during the last several years,” Volkmann said.

“I took it upon myself to say we’ve got to keep working out here,” Halloran said. “It’s not a one-and-done effort. You don’t go out there and chop out the trees and invasive species and plant new trees and say our work is done here, because it’s not.”

While these efforts will help clean up the campus, Halloran says there is still much work to be done.

“Kent and I have worked together for a number of years, and he has always been the person to lead the charge when talking about saving and improving Carmack Woods,” Volkmann said. “Kent believes this is a valuable resource both in terms of its environmental value and as a teaching and research opportunity to many students and faculty.”

“Kent has truly been a force in pushing this project forward,” Backs said. “Without his help, volunteers would still be out with saws and loppers trying to get all of the honeysuckle taken care of! His assistance made this project come to fruition so much faster than I ever anticipated, and I'm really looking forward to seeing all the growth at Carmack in the spring.”

The next priority on Kent’s list includes cleaning up and planting trees and shrubs at the Jennings Hall Rain Garden in early November.

If you would like to take part in the fall clean-up effort, you can be there at 9:30 a.m. on Saturday, November 2. Tools and refreshments will be provided.