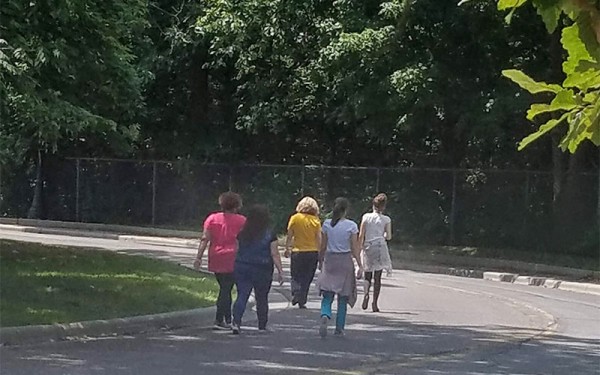 Catherine Black has taken the wheel and is steering her life toward healthier outcomes. The former truckdriver – turned Environmental Health and Safety (EHS) officer – is committed to moving throughout her day. In her former life, Black often suffered from back problems while behind the wheel. She had two bulging disks, and one of them herniated 7 years ago.

“The more movement I put in my day, the better I feel,” Black said. “I don’t want to sit for two hours.”

Black, also a Wellness Innovator, has initiated walking meetings to put more movement into her day.

Black cites that, in Europe, they’re designing buildings that have first floor tracks and tables where employees can stand and have coffee.

“But there’s nowhere to sit,” Black said. “So, it kind of forces you to have some meetings while you’re walking, and it’s really nice.”

Numerous medical studies have shown that men and women who sit for more than five hours a day increase their risk of heart disease by as much as 30%. The Mayo Clinic suggests the following healthy habits to reduce your risk:

Position your work surface above a treadmill — with a computer screen and keyboard on a stand or a specialized treadmill-ready vertical desk — so  you can be in motion throughout the day.

“We sit way too long,” Black said. “We sit at work. We get in our cars and sit. Then we get home and watch television. That’s way too much.”

So far, Black has participated in 10 to 15 walking meetings. Every personal phone call she takes, she walks. She says there are usually two to three other people from EHS in these meetings.

They are still in the early stages of developing the get-togethers, but they don’t come without challenges.

Black says she encourages other departments to take part in walking meetings.

“Every 30 minutes to an hour, get up and move,” Black said. “If you can’t leave your office, walk around your chair for a couple of minutes.”