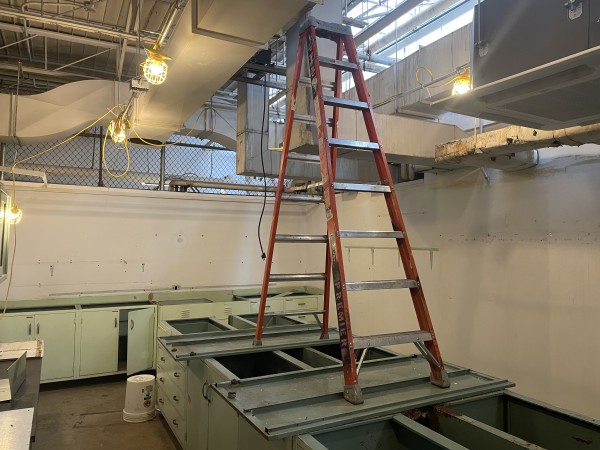 Incident Type - Unsafe Act and Unsafe Use of Equipment

Incident Summary - A renovation project was being completed, when it was noticed that a ladder was being used in an unsafe manner. The 10-foot step ladder had been placed on top of an old laboratory counter to provide access above the ceiling. The counter that the ladder was on did not have a countertop surface, so two discarded shelves were placed to act as a temporary surface for the legs of the stepladder. The shelves were not anchored to the counter in any manner.  This improper use of the ladder could have caused a serious injury, as a ladder user could have fallen 8 to 12 feet to the concrete surface below due to the inadequate ladder support.

Corrective Actions - Environmental Health and Safety (EHS) immediately contacted the renovation project manager to alert them of this issue. EHS told the project manager that the ladder must be removed from the counter immediately and that no work involving ladders should continue until the issue was resolved, as ladders should always be placed on solid and stable surfaces. The ladder was promptly removed and the ladder users were properly educated on ladder safety.